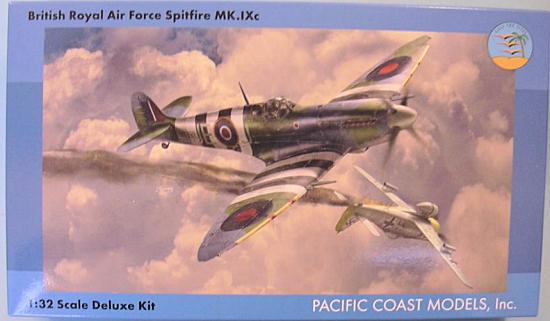 The Spitfire IX, began life as an “interim” development of the Spitfire V - which itself was an interim development from the Spitfire I - pending the full development and introduction of the Spitfire VIII, with its airframe properly redesigned to take the increase in power offered by the Merlin-60 series with a two-stage supercharger. The reason for the urgency was the appearance of the Focke-Wulf Fw-190A, which o completely outclassed the Spitfire V that equipped nearly all squadrons in Fighter Command that Wing Commander Al Deere said the Spitfire was only superior in the turn, and “turning doesn’t win victories!”

Introduced in mid-1942, by the summer of 1943 the Spitfire IX had given the RAF back equality of equipment vis-a-vis the two Luftwaffe Geschwadern on the Channel Front, while their increasing numbers eventually provided air superiority.

Interestingly, these two closely-related “interim” types accounted for more than half of all Spitfires produced during the Second World War, with the Spitfire IX beating out its progenitor by a nose to become the most-produced Spitfire sub-variant.

When Ken Lawrence of Pacific Coast Models first told me last summer that he was contemplating releasing a Spitfire IX, I told him that he would have to be willing to go the extra ten miles to be sure he “got it right,” since there has never been a Spitfire IX in any scale that completely captured the subtle shape of the Spitfire IX.  Since th

en, Czech Master Resin has come out with a Merlin-60 Spitfire series that offers dead-on accuracy for the high price they charge for their full-resin kits.

When I opened the box, I could tell at a glance that Ken had indeed walked the extra twelve miles.  In fact, it looks like a scaled up CMR kit - which is unsurprising when you discover that the designer of the CMR kits had an important hand in the design of this kit.  Putting the parts on drawings, and doing the various measurements that Bruce Archer used in his analysis of the Hasegawa Spitfire, it is clear that the kit is the most accurate Spitfire IX kit in a scale larger than 1/72.

The plastic airframe parts are molded by Sword and have a nice shiny finish, with petite engraved panel lines.  The resin cockpit interior will provide one of the most detailed Spitfire cockpits ever.  The interior detail is finished off with a good photo-etch set by Eduard that provides instrument panels and multi-part seat belts.  The clear plastic parts are thin and free of distortion and there should be no problem posing the canopy in the open position.  The resin wheels provide both the “solid” and five-spoke centers.  Resin exhausts for the early “fishtail” and later “tube” exhausts are provided.

The upper wings have the cannon covers separate, which will make things easy for the coming Spitfire IXE and Spitfire XVI, and the likely Spitfire VII and VIII kits. The two cannon covers are the large teardrop for the early-production Spitfire IX (known as the Spitfire IXB) and a second bulged cover that is apparently for th

e late-production IXC. The third cover has separate bulges which can be placed inboard or outboard as the occasion merits to do either the "C" or the "E" wing.

Decals cover six aircraft: WZ-JJ pf the 309th FS, 31st FG in Italy; MK392/JE-J flown by Wg Cdr J.E. "Johnnie" Johnson at Normandy (not as OC of the Kenley Wing - that was the year before); PT396/EJ-C of Wg Cdr Jack Charles, RCAF, 1944; EN315/ZX-6, an early-production Spitfire IXB flown by Wg Cdr Stanislaw Skalski in Tunisia (which uses the small intake, not the tropical intake the profile shows); MM.4095/5-19 of 8th Grupo, AMI in 1947; and "Red 2" of the Red Air Force. Full stenciling for one aircraft is provided, and all decals are of high quality. It should be noted that the "Sky" color of the ID codes is not a correct color; a modeler should replace these if possible or change the shade of the spinner and fuselage band to match. Also, the US insignia for WZ-JJ is completely inaccurate, as shown on the profile instructions, which is right; a modeler wanting to do this aircraft should obtain other decals for the national insignia.

Finally!!  An accurate Spitfire IX out of the box that doesn’t require a recalculation of the national debt to afford it!  I told Ken Lawrence if he got this right he’d have a licence to print money, and I can hear the presses spinning up from here. Be sure which version of Spitfire you are doing by checking photo references, so you get it right as to use of the large or small intake, the fishtail or tube exhausts, the wheels, and the cannon covers.

This is not a difficult kit, and will provide an excellent model out of the box, while allowing a modeler to go to town on creating a more highly-detailed model.  I’m sure every “Spit Boffin” will get more than one of these, and is already looking forward to the coming releases.  Highly recommended.

Review kit courtesy of Pacific Coast Models.  Get yours at www.pacmodels.com