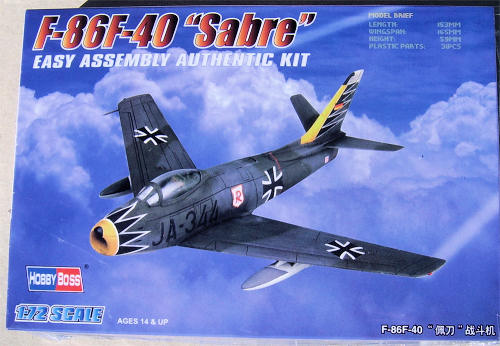 The F-86F-40 was a version of North American’s Sabre built for export. It introduced an extended wingspan with slats. Combined together these changes reduced landing speed and returned some of the Sabre’s low speed handling qualities that had disappeared with the 6-3 wing of the F-30. The slightly larger wing area also reduced take-off distance.

The USAF liked these changes so much they retrofitted many of their surviving earlier model F-86’s with these changes.

This is the second of Hobby Boss’s 1/72 Sabre kits. All the parts are the same other than the wing. General comments are the same as for their F-86F-30 kit so I will keep this preview to comments on the wing and decals other than to say that panel lines are engraved and there is reasonable de

tail on the parts for this scale.

The new wing moulding, which includes the bottom part of the fuselage as well as wing upper and lower surfaces all in one piece, portrays the extended span F-40. This wing was extended 12 inches and reintroduced slats, both of these are present on HB’s new wing. As I’m not one for measuring things to the smallest degree I say it looks like it should and will leave it to others to fill up Megabits of the Web with their own judgements.

The decal sheet in this issue is almost as big as the box and appears well printed and in good register. The choices are:

A single aircraft (966) from the JASDF Blue Impulse aerobatic team, all markings are supplied for this aircraft and it would be interesting to see how these fit.

A camouflaged aircraft from JG71 of the German Air Force 1963, this includes the yellow band for the nose area and I would be surprised if this curved to the contours of the Sabre in this area.

A small amount of stencilling is provided as well as wing walkways. Mr Hobby Mr Colour and Aqueous Hobby Colour numbers are shown with names given.

To sum up this appears to be a kit that would build into a reasonable model of the F-86. The proof of course will be in the making, if that has no major snags then HB’s Sabres provide the budget conscience modeller with a modern kit of a popular type that can be built in many colour schemes.