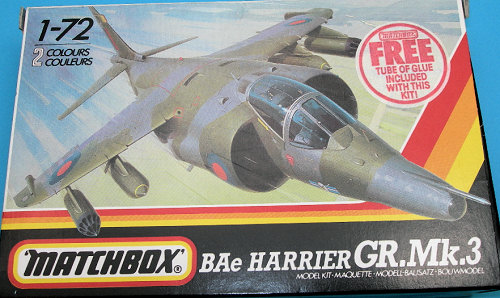 The first vertical take-off (VTOL) aircraft to enter service in any  Air Force, the Harrier originates from a design study carried out by the Hawker Project Office in 1957, and the definitive RAF version the GR MK1 flew in December 1967. A number of engine changes to more powerful versions of the Pegasus resulted in 1973 in the GR MK3 which with the addition of Laser range finding and marked target seeker added a nose extension together with radar warning receivers on the fin and tail boom. Harriers are used by the US Marines as the AV8-A and machines have been supplied to the Spanish Navy. (Thanks to the kit instruction sheet.)

Matchbox’s upgraded Harrier kit only differs from PK-16 with a new two-piece Laser nose, and the RWRs on the fin and the tail cone. The kit comprises 57 parts (including one-piece clear canopy) that are cleanly molded but does feature their heavily engraved panel lines. The kit’s very basic cockpit consists of a well-done pilot, a seat ‘shape’ that also doubles as the aft bulkhead, and a partial instrument panel face attached to the coaming. As the Harrier’s gear doors are closed except during gear cycling, the two small openings to accommodate the landing gear legs are legit. The gear legs and tires actually look good, but the two small doors that attached to these are too thick. If desiring to pose the model in flight, two extra outrigger gears that are retracted are included.

External stores are limited to the wing hard points and to occupy the four separate pylons, two (three-piece) Matra rocket pods and two (two-piece) British GP bombs are included and look adequate. As there are no gun pods or center pylon included, the two strakes are.

Matchbox has engineered the kit so that the four fuselage nozzles can rotate that should appeal to the younger builders while the missing auxiliary intake doors on the separate intakes will not be appreciated by the adult builders. 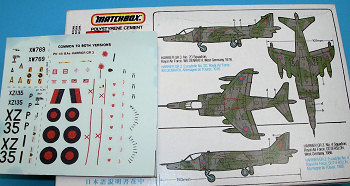 The assembly is covered on a white single sheet in well-illustrated steps with the detailed colour notes offered at the end. As this would appear to be a Revell Germany product (they purchased the Matchbox Kit Division in 1990), the excellent decal locations and colour guide is offered on this sheet and on the back of the box in colour.

Kit decals look excellent. Both decal options are RAF subjects being finished in low-viz markings and wrap around camouflage of Dark Green and Dark Sea Grey. Harrier GR.3s are from No 3 and 20 Squadrons and the only real difference is their unique squadron emblems on the nose.

There are better 1/72 scale Harrier GR.3s on the market. However, don’t totally discount this basic kit. With some minor external work like dealing with the missing auxiliary intake doors and heavy engraving, it can be made to look adequate.

If you would like your product reviewed fairly and quickly by a site that has around 400,000 visitors a month, please contact me or see other details in the Note to Contributors.