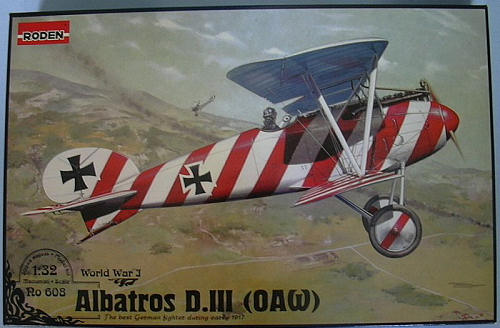 The Albatros series of fighters were, at the time the D.I and D.II were introduced on the Somme Front in the fall of 1916, the most advanced fighters in the world, setting the parameters for the next 20 years: two 30 caliber machine guns, a high speed, good maneuverability. The airplanes were so advanced in comparison to their British opponents that they transformed the air war on the Western Front.

Unfortunately, Idflieg, the German Air Force high command, had been taken by the success of the French Nieuport series of sesquiplanes that had ended the "Fokker Scourge" in early 1916. As a result, all German aircraft manufacturers were instructed to produce sesquiplanes, no matter the fact that the design really only worked with a low-powered, lightly-loaded airplane. This was just what the Albatros wasn’t, but the company proceeded to convert their very successful, heavy, highly-loaded, fast biplane to a sesquiplane. This crippled the design for the rest of its service through to the end of the war.

In response to Idflieg, Albatros began work on the prototype D.III in late July or early August 1916, with the first flight of the prototype most likely occurring in September 1916. The D.III used the same semi-monocoque plywood skinned fuselage of the D.I and D.II. The D.III adopted a sesquiplane wing design with an extended upper wing, while the lower wing was reduced in chord with a single main spar. After a

The first D.IIIs entered squadron service in December 1916 with "Jasta Boelke." Early aircraft had a centrally-mounted radiator that could scald the pilot if it was hit, which was changed after the production of 290 D.IIIs. More seriously, the weakness of the wing was soon apparent. While suspicion centered on the strength of the wing, the truth was that the spar was too far aft, which induced aerodynamic twisting under aerodynamic loads. This was unknown throughout the production of the D.III and the later D.V, which meant that pilots were forced to handle their airplanes with restraint - exactly what isn’t wanted in a fighter. The situation was so bad in January 1917 that the D.IIIs were grounded until Albatros could produce a specially strengthened wing (which didn’t solve the problem since the basic design was wrong). The D.III regained airworthiness just in time to become the killer of "Bloody April." Unfortunately, good as it was, the D.III could always be outfought by an Allied fighter whose pilot wasn’t afraid to throw the controls around. Due to the aerodynamic problem, pilots like Manfred von Richtofen created the really effective style of air combat: rather than dogfighting the opponent and giving him an even chance, they learned to ambush the enemy, taking him out with a surprise attack from above, diving away immediately. "Beware the Hun in the sun!"

Albatros built 500 D.IIIs at the Johannistal factory before transferring all D.III production to their subsidiary, the Ostdeutsche Albatros Werke, where the D.III remained in production until December 1917. OAW had a reputation for quality work, and it was generally conceded that the D.III (OAW) was superior to the original product, and was the best German fighter prior to the introduction of the Fokker D.VII.

The OAW-built D.III was so good that as of August 31, 1918, there were still 54 of them in front line service on the Western Front.

As Kyle Bodily said in his original review of the Roden 1/32 Albatros D.III, it was only a matter of time before the D.I, the D.II and the D.III (OAW) appeared. The D.I showed up two months ago, here now is the D.III (OAW). Can the D.II be far behind?

This kit differs from the original D.III kit primarily in having only one upper wing, with the offset radiator, and the larger rounded rudder that visually distinguished the D.III (OAW). Decals for four aircraft are pr 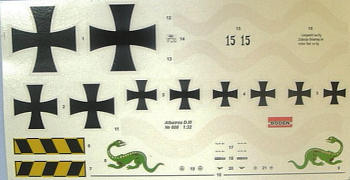 ovided, including the boxart airplane that is alleged to have been flown by Ltn. Josef Loeser on the Italian Front, surely one of the most colorful German fighters of the entire war.

People have complained that the Roden kits have doubled in price in the past couple of years. I queried Roden about this, and was informed that we in the West should be aware that at the time of the orange Revolution, the Russians - who supply all the oil and natural gas energy used in Ukraine - more than doubled the price they had been charging for these energy essentials. This price increase has filtered through the entire Ukrainian economy, and has been felt most especially in plastics, where the increase in cost for the basic materials, for the production materials, and for transportation, are all highly reactive to such a price increase.

For those World War I modelers who want a kit that can produce a great model out of the box, or provide the basis for a real show-stopper without that much extra effort, these Roden 1/32 World War I kits are great. They are simple enough that a modeler who hasn’t done a World War I modeler before can approach them with confidence of producing a successful model, while providing excellent, accurate detail. I have always thought that 1/32 was the perfect scale for World War I models, and these kits prove me right. The Albatros series are some of the best-looking airplanes of the First World War and this kit doesn’t disappoint. Highly recommended.