The Junkers Ju 188 was a German Luftwaffe high-performance medium bomber built during World War II, the planned follow-on to the famed Ju 88 with better performance and payload. It was produced only in limited numbers, due both to the presence of improved versions of the Ju 88, as well as the deteriorating war condition and the resulting focus on fighter production.

The first three production Ju 188 E-1 machines were delivered with the BMW engines in February 1943, another seven in March, and eight in April. A conversion testing unit was formed up in May, and after testing were attached to an operational unit, with the first mission, an attack by three Ju 188E-1s on a factory in Lincoln, Lincolnshire taking place on 18 August 1943. By the end of the year, 283 Ju 188s had been delivered (including Ju 188Fs), and two new factories were added to the production effort. Most operational machines differed from the prototypes only in having a 20 mm MG 151/20 cannon in the nose and dorsal turrets in place of the 13 mm (.51 in) MG 131. The MG 131 I was intended to be used in the Ju 188 E-1 or the G-2. But the heavy armament in the A and E series was the MG 151/20. The Ju 188 E-2 was built as a torpedo-bomber, but was identical to the Ju 188 A-3.

Although the A and E models were to have been delivered at the same time, the Jumo engine was still having difficulties getting into production. Nevertheless, the first Jumo powered Ju 188 A-1 versions were shipped only shortly after the BMW versions, albeit at a much slower rate. By the time delivery rates were finally picking up in late 1943, the Jumo was available in a new MW 50 methanol-water injection "boosted" version that delivered 1,648 kW (2,241 hp) for takeoff. With this engine, the planes were known as the Ju 188 A-2, and started deliveries in early 1944.

A modified version mounting a small FuG 200 Hohentwiel sea-search radar set under the nose and shackles for a torpedo for naval strike missions was delivered as the Ju 188 E-2, and with the Jumo as the Ju 188 A-3. The only other difference was the removal of the outer pair of wing bomb shackles.

For all its good points, the Ju 188 was only a small improvement over the Ju 88 it was supposed to replace. The bomb load and bomb bay was no larger than the earlier plane, so although it could handle a larger load by mounting externally, doing so hurt performance. Even then the performance was rather poor considering all the effort - only 523 km/h (325 mph) or less. The dorsal turret had only one gun in it, yet the type retained the single-gun flexible position only a few centimeters away from it. In the meantime, the various projects to finally provide the plane with real tail armament were all abandoned.

Delivery problems of the Jumo were never entirely sorted out, and the only model to be built in large numbers were the series with the BMW 801. Even then so few were available that they were generally given out to Ju 88 units, who flew them on "special" missions where the longer range or better performance would be helpful.

Italaerie released this kit back in the early 1970s (before the new spelling) and as such is pretty much raised detail save for control surfaces and the like. There is a fairly nice cockpit with a floor, three seats, instrument panel, control stick and three crew figures to fit those generic seats. There is some detail on the inside of the fuselage sections. One has the option of including the upper cockpit turret or a blanking plate. There is a nose gun, a rear cockpit gun and a ventral gun. The clear bits are a forward section and an upper piece. Thanks to all the small windows, masking with be a bit more time consuming than your standard P-51.

Wings are an upper and lower piece with the full ailerons and flaps molded in the lower section. The main portion of the engine nacelle/gear well is in halves. The landing gear is properly complex for the type and there is really no well detail. You are provided four main gear doors, two of which are normally closed.

You can build either a BMW powered Ju-188E or a Jumo powered Ju-188A. My kit was missing the Jumo option and the props for it as they are different. The kit has separate elevators and rudder, though they are designed to be molded in the neutral position. Apparently most of the bomb load was carried externally as we are provided with four bomb racks and their bombs to place between the nacelles and fuselage.

Italeri's instructions are well drawn and provide a number of detail drawings to help with placement of the guns and the landing gear. Though my decals were toast, the kit normally comes with markings for three planes. One is an A model in RLM 75 upper and black underside. There are two E options. One is listed as RLM 74/75/65 but is in all likelihood RLM 70/71/65 in a slpinter pattern. The other A option is listed as RLM 75 upper and black underside with a mirror wave pattern of RLM 65. I am thinking that the proper color is RLM 76 vice 65. There are aftermarket markings out there if one looks. 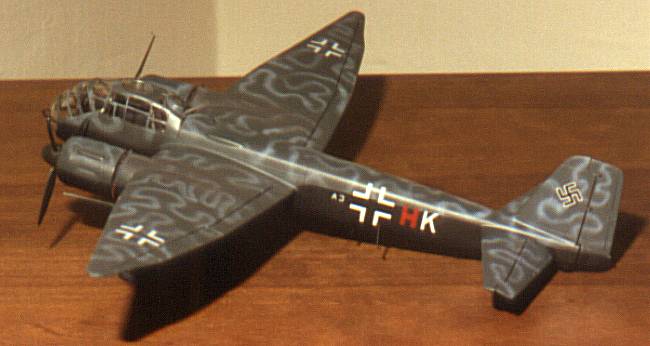 Thanks to me for the review kit.