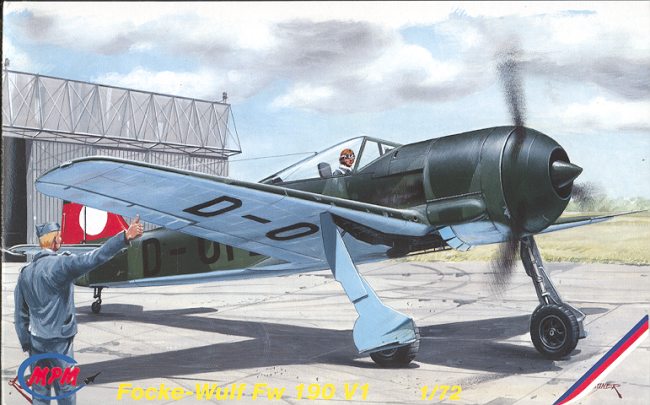 After the 109 had been in service for a number of years, it was time to look for a supplemental fighter. In 1937 a request was made of Focke-Wulf to start work on an aircraft using either the DB 601 in-line engine or the BWM 601 12-cylinder, twin-row radial. Designer Kurt Tank chose the larger radial engine. While this took many by surprise, it is surmised that this choice was made because the BMW radial, being air-cooled, would not have radiators or other things hanging off the airframe to spoil the aerodynamics. It also was one less thing to worry about being damaged by enemy fire.

The unarmed prototype took off  in June of 1939. It had a fan just behind the propeller to help cool the engine and it also had a large, ducted spinner in hopes that it would provide extra streamlining and speed. However, it just increased the engine's propensity to overheat. The second prototype also had the ducted spinner but was fitted with armament of two 13mm and two 7.7mm machine guns. Overheating was still a problem so the big spinner was discarded in favor of a close fitting cowling. While the prototype is easily recognizable as a FW-190, it went through many changes to the first production versions, the most obvious being longer wings and a shorter canopy.

Allow me to perpetuate the cliché, 'this is a typical Czech limited run kit'. It has all the standard features of thick sprue attachment points, flash, large ejector stubs on the big pieces, fine engraved panel lines, a rather rough textured finish, etched brass fret, vacuformed canopy and excellent Propagteam decals. Oddly the decals do not include a broken up swastika, but that should not be a problem.

Other etched metal parts are for the oleo scissors, step and a canopy brace. There is no engine at all as the spinner pretty well hides all of that. Being the prototype, there is only one option and that is in a splinter pattern of RLM 70/71 uppers with RLM 65 lower surfaces. It also has a red tail stripe with a white circle in which is shown the swastika. You'll have to paint the red tail stripe on or use a red stripe decal from another sheet. The excellent decal sheet provides the civil codes and white circle for the rudder.

It looks like an easy kit to build, but I can tell you that it will take skill to do the model justice. If you like prototypes, then this is one you should have on your shelf.

Review kit courtesy of me and my wallet!

If you would like your product reviewed fairly and quickly by a site that averages over 2,700 visits a day, please contact me or see other details in the Note to Contributors.