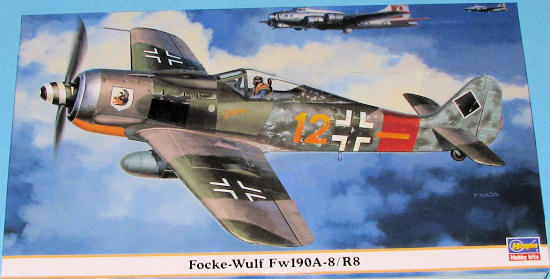 The FW-190A-8 was the penultimate radial engine 190 version, (the last production A model was the up-engined A-9). It was probably the most widely used version of the last months of the war, though by then there was little it or any other weapons system could really due to stem the tide of Allied advances.

The A-8 version was basically an updated A-7. The A-7 variant brought into production the replacement of the 7.92mm cowl machine guns with 13.3 mm versions, a distinguishing feature of the version. However, fewer than 100 were built before moving on to the most produced variant, the A-8 with about 1,300 completed before war's end. There were a myriad of 'options' that could be attached to the A-8 air frame in terms of weapons and armor. Suffice it to say, it was a very nice handling aircraft and thanks to its roomier cockpit and wider tracked landing gear, often preferred over the later model 109s.

One of the more interesting variations was the more heavily armored /R8 version. This aircraft was often the equipment of Sturmgruppe, whose main mission was to get in close to enemy bombers and shoot them down. To help protect the pilots, the aircraft was up armored with a thicker oil tank cowling armor section, scabbed on cockpit armor around the front of the cockpit, and in some cases, extra thick plexiglas armor for the side of the canopy. Many pilots did not like this additional canopy armor and often flew without it installed. Thanks to the additional weight of this armor, often times the upper cowling guns would be removed. Sometimes the troughs and openings were filled, but more often they were just left as they were. These planes generally had the 30mm Mk 108 cannon in the outer wing as these guns would easily knock down a B-17 with just a couple of well-placed rounds.

There is very little that is actually different in this kit from the standard A-8 boxing. On the clear sprue are the additional armored side pieces and there is a small etched fret included that has the scabbed on fuselage armor plating.

Some very minor surgery and hole opening will be needed on this one and in line with others in this series, the five piece cowling will need care in assembly. Two drop tank rack options are given, one being a larger version of the other. One of the bug-a-boos of 190 kits is the prop and while I can't say for sure, this one does very much look the part. 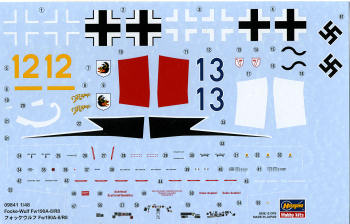 Instructions are the usual well done versions with Gunze references. I also noticed several small drawings to help with alignment and getting parts installed properly where they might be reversed. A nice touch. Markings are for two aircraft. The box art plane from 6.(Sturm)/JG 300  is yellow 12 and flown by UnterOffizier Paul Lixfeldt in late 1944. This one has an unpainted metal upper forward cowling and cowling ring. Standard RLM scheme of 74/75/76 on both of them. The other is the black nosed blue 13 of JG 300s Kommodore, Major Walther Dahl. This is a popular scheme that many will probably try to use. Interestingly, though the instructions say JG 300, the unit badge is JG 3 'Udet'. Dahl's plane has the cockpit armor where the other does not.  Decals are very nicely done and include Lixfeldt's red fuselage band and Dahl's white. I'd paint them on myself.

Another limited issue reboxing from our friends at Hasegawa. As with many of those that include upgrade bits, this one will probably sell out rather quickly, despite the additional cost. One thing for sure, it will make into a very nice model of this interesting variant.

My thanks to www.dragonmodelsusa.com for the review sample. Get yours at your local hobby shop or ask them to order it for you.

Back to the Review Index Page