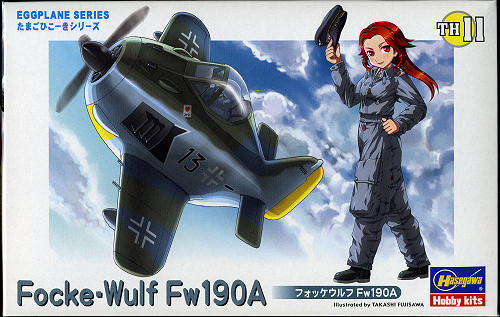 Let's just say that, next to the Bf-109, the FW-190 was the second most important fighter produced by Germany during WWII and leave it at that.

As they are designed to be built in a relatively short period of time, there isn't much to them. Three sprues are provided, one dedicated to the one-piece clear canopy. The smaller of the two sprues has the wings and tailplanes. Both are single piece and the wings have a slot for the landing gear legs. These latter have the gear doors molded on so one simply attaches the wheels. The wheels are all wrong for a later FW-190A, even if the holes in the wheels were not now mini-towers. The more discrete modeler will replace them with aftermarket. I would be remiss to not mention that there are no cannon bulges for the wing cannon either. 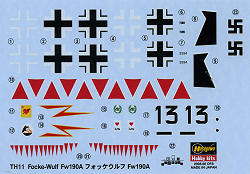 The cockpit is a shambles with little more than a seat, an instrument panel decal and not even a pilot to fill in the space. Head armor is totally inaccurate. Prop is fair and with the large fan, no need for any engine detail. Someone at Hasegawa totally missed that FW-190As did not carry a 250 kg bomb under each wing. Those were the G models that did that and this is obviously not a G. It would have been more accurate to have a centerline rack with a drop tank, but none is provided.

Markings are for two aircraft. One flown by Heinz Bar and the other by Herman Graf, though neither has their kill markings on the rudder. Both are in RLM 74/75/76 and should have some mottling on the fuselage. At least a swastika is included. Decals are well printed and should go on with minimal fuss.

It would be hard to recommend this one to the serious builder. The number of errors in shape and proportion are legion and only a madman would attempt to make the needed corrections. However, if one is looking for a quick build or something for the kids to play with, then this one is right up your alley.

Thanks to www.dragonmodelsusa.com for providing the preview kit. You can find this beauty at your local hobby shop or ask them to order one for you.