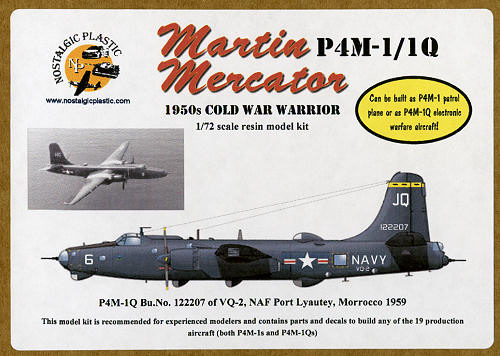 The Martin P4M Mercator was an American twin-engined martime reconnaissance aircraft built by Martin. The Mercator was an unsuccessful contender for a United States Navy requirement for a long-range maritime patrol bomber, with the Lockheed P2V Neptune chosen instead. It saw a limited life as a long-range electronic reconnaissance aircraft. Its most unusual feature was that it was powered by a combination of piston engines and turbojets, the latter being in the rear of the engine nacelles.

Work began on the Model 219 in 1944, with the first flight being on October 20, 1946. A large and complicated aircraft, it was powered by two Pratt & WhitneyR4360 Wasp Major 28-cylinder radial engines. To give a boost during takeoff and combat, two J-33 turbojets (Rolls-Royce_Derwent clones) were fitted in the rear of the two enlarged engine nacelles, the intakes being beneath and behind the radial engines. The jets, like those on most other piston/jet hybrids, burned gasoline, not jet fuel.

A tricycle undercarriage was fitted, following Navy preferences, with the nose wheel retracting forwards and the single-wheel main legs into coverless fairings in the wings, so that the sides of the wheels could be seen even when retracted. The wings themselves, unusually, had a different airfoil cross-section on the inner wings than the outer.

Heavy defensive armament was fitted, with two 20 mm cannon in an Emerson nose turret and a Martin tail turret, and two 0.5 in (12.7 mm) machine-guns in a Martin dorsal turret. The bomb-bay was, like British practice, long and shallow rather than the short and deep bay popular in American bombers. This gave greater flexibility in payload, including long torpedoes, bombs, mines, depth charges or extended-range fuel tanks.

The US Navy chose the smaller, simpler and cheaper P2V Neptune for the maritime patrol requirement, but nineteen aircraft were ordered in 1947 for high-speed minelaying purposes; these were modified for the electronic reconnaissance (or SIGINT, for signals intelligence) mission in 1951, to replace the PB4Y Privateer. The crew was increased to 14 and later 16 to operate all the surveillance gear, and the aircraft was fitted with a large number of different antennas.

Missions were flown from the Philippines (and, later, Japan) by Fleet Air Reconnaissance Squadron One (VQ-1) along the Chinese borders and along the eastern Russian coasts, and were of a highly secret nature; the aircraft masqueraded as regular P2V Neptunes in radio communications. One Mercator was shot down by Chinese fighters in 1956, while another was attacked by two fighters in 1959 but escaped with injury to one crewman. The aircraft were also operated out of Morocco by VQ-2, where one aircraft was intercepted near Ukrainian airspace by Soviet MiG's. It escaped by flying under jet power but ran out of fuel and crashed into Mediterranean Sea with the loss of all crew.

The Mercators were replaced by the A3D-2Q (EA-3B) Skywarrior, which being carrier-based had a greater degree of flexibility. Final withdrawal from service was in 1960, and all of the remaining P4Ms were scrapped.

This particular kit is molded by Anigrand Craftworks in Hong Kong, so we all know what to expect. The molding is up to Anigrand's usual fine standards with nicely engraved panel lines. A full set of clear resin parts for the canopy, windows and upper turret is provided. These are nicely molded as well and pretty clear, requiring only perhaps a dunk in Future to add more shine. A first that I can recall from Anigrand molded kits, is that there is cockpit sidewall detail.

The kit has all the various bits and pieces available to make either a standard patrol bomber or an ELINT version.  The kit provides all the additional antennas that are needed. There is the usual somewhat generic cockpit that consists of two seats, control wheels and a center console. It would be nice to have a decal instrument panel included. Perhaps one of these days. The landing gear are resin, which surprised me as I'd have thought metal would have been appropriate for a model that will weigh as much as this one does when done. This is particularly true of the main gear legs which are a 'half fork' version and so may be prone to the infamous 'resin sag' as time goes on. Perhaps the resin is thick enough to withstand things. Time will tell.

There is room in the nose section for the weight that will be needed to keep this one from tail sitting. Nose gear is a single piece with the wheel as part of the strut, so deformation should not be a problem. The kit has a forward cylinder section for the cowling (more than sufficient) as well as separate blades and spinner.

Kit instructions consist of an assembly guide (no exploded view or drawings) with a few assembly photos to help guide you along. Really, on a kit like this, it is quite adequate. Color information is provided and all Mercators were painted in overall sea blue, so this will make painting relatively easy. Since the radomes have a matte white or 'natural' fiberglass forward section, it may be easier to get them to fit first, then paint them and then do the final attachment. A very comprehensive decal sheet is part of the package and these appear to be extremely thin. There is a rather detailed explanation for their use included. There are serial blocks for all 19 planes; and the sheet provides tail markings for  VP-21,  VW-2, VQ-1 and VQ-2. There are also additional nose numbers if one so wishes. A nice bonus and something I'm sure you will find useful for the build, is a CD that provides a goodly selection of photos. I know I used the one provided for the C-141 and will be using this one as well.

It is about time that we finally had a decent model of the Mercator. Though this one is rightly categoried as for those with experience, it is one that should be relatively straight-forward to build, should exercise a few of those modeling skills, and result in a superb model of an important, but frequently overlooked Navy aircraft. I'm going to do mine to match the photo I was given by a now gone friend who flew in these with VQ-1 during the mid 1950s.

My thanks to www.nostalgicplastic.com for the preview kit. You can order yours today from the link and pay  no shipping fees in the US or Canada.